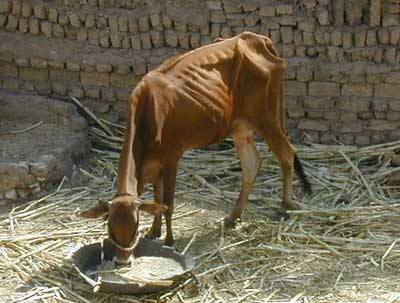 Although animals will usually eat until the day they die, they continuously lose weight and waste away. 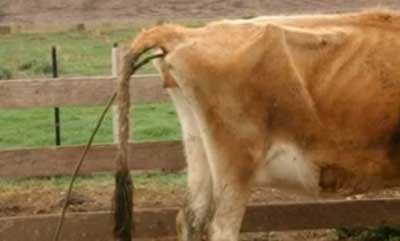 Cow's with Johne's disease (paratuberculosis) generally suffer with profuse watery diarrhea which is refractory to treatment.

In 1826, d' Aroval reported a form of enteritis which occurred in some cattle with chronic diarrhea. Hansen and Nielsen in 1881 observed the thickening and corrugation of the intestinal mucosa of cattle dying from this special form of enteritis. It was in 1895 that Johne and Frothingham described the disease and demonstrated the presence of acid-fast bacilli in sections of diseased intestine. The presence of acid-fast bacilli, indistinguishable from the tubercle bacillus, made them think the condition was an atypical or unusual form of tuberculosis. Their thoughts were shared by Robert Koch. In 1906, Bang re-evaluated the disorder, determined it was not tuberculosis, and called it pseudo-tuberculous enteritis or Johne's disease. Between 1902 and 1908, pseudo-tuberculous enteritis of cattle was reported from Denmark, Germany, France, Norway, Holland, Belgium, Switzerland, and the United States. Twort isolated the causative organism in 1910 and named it Mycobacterium enteriditis chronicae pseudotuberculosae bovis johne. The disease later became known as paratuberculosis, or Johne's disease, and the causative agent, Mycobacterium paratuberculosis. The name Mycobacterium johnei has been used in the past as a synonym of M. paratuberculosis, but is not an accepted name and should thus be avoided. In 1990, Thorel et al., renamed the organism Mycobacterium avium subspecies paratuberculosis and is commonly abbreviated as "MAP". Both Mycobacterium avium subspecies paratuberculosis and Mycobacterium paratuberculosis are accepted taxonomic names of the organism.

Paratuberculosis in animals, also known as Johne's disease, is a chronic granulomatous inflammatory disease of the gastrointestinal tract of ruminant and other animals caused by infection with Mycobacterium paratuberculosis. Infection usually occurs within the first 30-days of life, but the disease does not manifest itself for years; signs of infection usually appear during early adulthood. There is no treatment and diagnostic testing is ineffective in identifying most animals during the early asymptomatic phases of the disease.

The primary mode of infection is via the fecal-oral route. Adult animals with clinical disease may shed more than 108 infectious organisms per gram of feces and, considering an average cow defecates 20-40 kg per day, environmental contamination may be great. Animals are generally infected at an early age (<30 days of age), as an age-dependent resistance appears to develop, but clinical signs do not generally occur until 3-5 years of age (early adolescence to prime of life). The severity and onset of clinical disease is dependent on such factors as level of environmental contamination (exposure dose), genetic susceptibility (inter- and intra-species differences in susceptibility), immunologic responses (maturity: age), and virulence of the M. paratuberculosis strain. 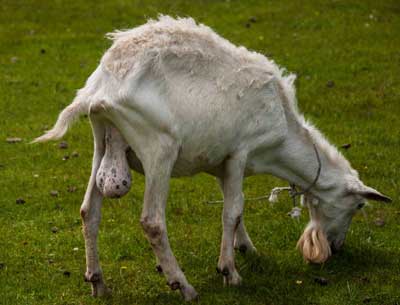 Goats, sheep, and related aniamls with Johne's disease (paratuberculosis) generally do not have diarrhea, but continue to lose weight.

The pathologic and immunologic natural history of the disease most closely resembles that of leprosy with tuberculoid and lepromatoid stages and a bipolar immunologic profile during the course of disease. Whereas M. tuberculosis has a predilection for the lungs and M. leprae for the skin and peripheral nerves, M. paratuberculosis has it for intestinal tissues. It is possible that M. paratuberculosis damages intestinal neurons in the same fashion that M. leprae damages peripheral nerves in leprosy. Experimental infections have clearly demonstrated that intravenous injection and intra-tracheal inoculation of the organism results, not in a systemic disease, but in a gastrointestinal disease. Experimental studies have also shown that, although extra-intestinal lesions are common and contain acid-fast bacilli, the organism fails to replicate outside the tissues of the gastrointestinal tract. Although infection may occur anywhere from the tonsils to the rectum, the most common site of infection is the terminal ileum, most often near the ileo-cecal valve. The mechanisms and reasons why M. paratuberculosis specifically homes to, and replicates in, the gastrointestinal tissues have not been elucidated.

Although primarily a disease of ruminant animals, under select and undefined conditions, monogastric animals, including nonhuman primates may also become infected and develop intestinal disease. Despite the wide host range, M. paratuberculosis has historically been considered innocuous in humans; it has only recently been specifically classified as a biohazard Level II agent and its innocuous nature in humans questioned.

Immunologic tests fail to identify most animals during subclinical infection and cultivation of the organism is problematic, requiring specialized media, long incubation periods, and experienced personnel. Mycobacterium paratuberculosis is an extremely fastidious acid-fast bacillus that requires 8-16 weeks (or longer) for growth on artificial media; some strains fail to grow. Because of an apparent inability to synthesize the iron chelating siderophore mycobactin, an exogenous source of mycobactin is required for its growth in artificial egg-based media.

For more information, go to: